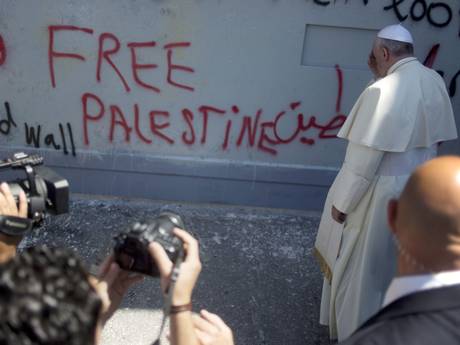 Pope Francis has prayed at the concrete barrier Israel is building in and around the West Bank during his three-day tour of the Middle East.

The unscheduled stop came after he called for an end to the “increasingly unacceptable” Palestinian-Israeli conflict.

Speaking in Bethlehem, the Pope invited the Israeli and Palestinian presidents to the Vatican to pray for peace.

The tour’s official purpose is to improve ties with the Orthodox Church.

The Pope is to meet Bartholomew I, the Orthodox Patriarch of Constantinople, in Jerusalem later – to commemorate the 50th anniversary of a historic meeting of Catholic and Orthodox leaders who moved to end 900 years of division between the two churches.

Francis’s visit comes just weeks after peace talks between Israel and the Palestinians broke down, and his invitation to Rome for Presidents Peres and Abbas – quickly welcomed by both – is an intriguing development, says BBC Middle East Editor Jeremy Bowen.

Following the Mass in Bethlehem, the Pope flew by helicopter to Tel Aviv where he was formally welcomed to Israel by President Shimon Peres and Prime Minister Benjamin Netanyahu.

“The time has come to put an end to this situation which has become increasingly unacceptable,” the Pope said on Sunday as he met Palestinian leader Mahmoud Abbas.

He talked of the “tragic consequences of the protracted conflict” and the need “to intensify efforts and initiatives” to create a stable peace – based on a two-state solution. 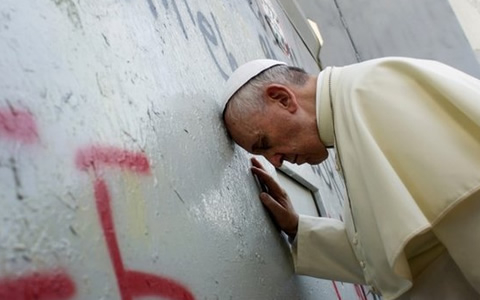 He later held an open-air Mass for 8,000 local Christians by Bethlehem’s Church of the Nativity, during which he said he wished to invite Mr Abbas and Mr Peres to join him at the Vatican “in heartfelt prayer to God for the gift of peace”.

The Pope’s spokesman, Federico Lombardi, told the BBC the move was papal peace initiative and believed to be the first of its kind.

Pope Francis has insisted the purpose of his Middle East trip is purely religious, but his first speech on his arrival in Bethlehem showed he is also willing to address pressing political issues, correspondents say.

On his way to Bethlehem, he stopped to pray at an 8m concrete wall that is part of the barrier Israel is building in and around the West Bank.

The Pope rested his head against the wall – which Israel says is needed for security, but the Palestinians see as a land grab – near graffiti reading: “Free Palestine.”

Palestinian officials have noted that Pope Francis is the first pontiff to travel directly to the West Bank rather than enter via Israel: Many Palestinians see that as a recognition of their push for full statehood.

Israel has issued restraining orders against several Jewish right-wing activists this week over concerns that they could try to disrupt the visit.

Twenty-six people were arrested overnight for throwing stones and bottles at police during a protest at a holy site on Mount Zion, reports say.

The Pope’s tour began on Saturday with a visit to Jordan.

On Monday he is due to visit the al-Aqsa mosque complex in Jerusalem’s Old City followed by the Dome of the Rock and the Western Wall.

Pope Francis will be the fourth leader of the modern Roman Catholic Church to visit Jerusalem, after Popes Paul VI, John Paul II and Benedict XVI, who went there in 2009.

Posted by mahustlerszone on May 26, 2014 in Christianity, Global News, Religion 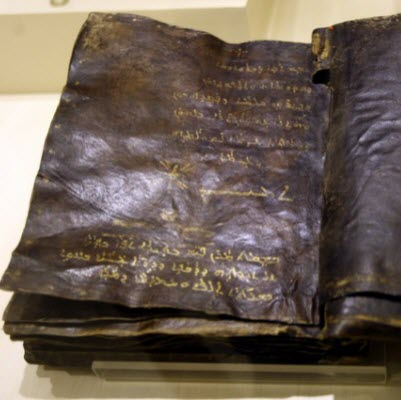 TURKISH authorities have found a new biblical book called the Gospel of Barnabas which makes astonishing and controversial claims including the fact that Jesus ascended to heaven alive and Judas Iscariot was crucified in his place.

Recovered by customs officials from a gang of smugglers, the Gospel of Barnabas is said to be about 2000 years old and has been valued as at about $28m. Among its controversial claims are that Jesus was not the the son of God but a prophet and that Apostle Paul is an impostor.

Some experts and local religious authorities insist that the book is original as it is written with gold lettering, onto loosely-tied leather in Aramaic, the language Jesus Christ spoke. In the main, the Gospel of Barnabas maintains a vision similar to Islam, contradicting the New Testament’s teachings of Christianity and indicates that Jesus also foresees the coming of the Prophet Muhammad, who would found Islam 700 years later.

In 325 AD, the world’s first ecumenical council known as the Council of Nicea, held in modern day Turkey to reach a Christian consensus on what should be contained in the bible. At the event, the contents of the modern day bible were agreed and many books were discarded of which the Gospel of Barnabas is thought to be one of them.
Ever since then, many biblical texts have begun to surface over time, including those of the Dead Sea and Gnostic Gospels but this book especially, seems to worry the Vatican. Christianity is currently founded on the four gospels of Matthew, Mark, Luke and John but the Vatican has asked Turkish authorities to let them examine the contents of the new book.

It is unlikely that the Catholic Church, however, will accept any new gospels or authorize the re-writing of the bible. Many Christian groups are also likely to regard the Gospel of Barnabas as a Muslim lie designed to discredit their faith.

Posted by mahustlerszone on May 4, 2014 in Christian Spirituality, Christianity, General News, Religion