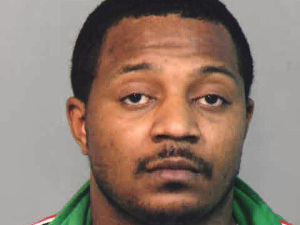 BALTIMORE: Four female prison guards in Baltimore fell pregnant to the same inmate, according to authorities who have busted a major smuggling gang inside the jail system.

Two of the women tattooed the inmate’s name on their bodies and he showered three of them with expensive gifts including cars and jewelry.

U.S. Attorney Rod Rosenstein said the 25 defendants participated in running the activities of the Black Guerilla Family – a prison and street gang – from behind bars in Baltimore City.

Thirteen female corrections officers, seven inmates and five alleged co-conspirators are charged with racketeering, money laundering and possession with the intent to distribute.

Officials say all 13 have been suspended without pay and the department is moving to fire them.

The affidavit says the corrections officers helped members of the notorious Black Guerilla Family gang smuggle cell phones, marijuana, prescription pills and cigarettes into the jail to sell to other inmates and make thousands of dollars.

“This situation enabled BGF members to continue to run their criminal enterprise within the jail and the streets of Baltimore,” said Steve Vogt, FBI.

Corrections officers hid the contraband in their shoes. Baltimore does not require employees to remove footwear when going through screening. The indictment says the ringleader, inmate Tavon White, reportedly made $16,000 in one month from the smuggled
contraband.

Four corrections officers-Jennifer Owens, Katera Stevenson, Chania Brooks and Tiffany Linder, who are also facing charges – allegedly fell pregnant to White while he was behind bars.

The indictment seeks the forfeiture of $500,000 and other proceeds of the enterprise, including luxury automobiles.

“It becomes embarrassing for me when we expose ourselves and we participate in an investigation that’s going to show what’s going on in our jails that I am not proud of,” he said.

Posted by mahustlerszone on January 14, 2015 in Bizzare

Teenager kills his Mother and has Sexual intercourse with her Corpse! WHAT A TWISTED LIFE!!

They were words that no mother ever wants to hear from her son. Teenager Kevin Davis confessed to his mum that he was so bored of life, he wanted to die. But a day later, it was her dead body police found – in very disturbing circumstances.

Kevin Davis, 17, lived with his mum Kimberly Hill, 50, in Corpus Christi, Texas. Kimberly was a carer in a hospice – devoted to looking after others in their final days, so when her son came to her saying he felt his life was over, she was left reeling.

On March 27, 2014, Kevin told his mum he was “weary of life and hated other people”. He’d had enough, and wanted her permission to die. His mum was understandably upset. She cared for people who had no choice about dying, and Kevin was just a teenager with his whole life ahead of him. So she tried to talk him out of it.

But at some point, the discussion made Kevin snap, and he attacked his mum. Grabbing a cord from a games console, he hooked it around her throat and tried to choke her. Then he used a hammer to beat her around the head around 20 times. With his mum dead, he undressed her and sexually abused her dead body.

The teenager then left a trail of blood in the home leading from the living room to the master bedroom, where Kimberly lay. He left a few written messages, one read: “Chase me. Sorry for the mess. KD.”

Taking his bike and backpack, he tried to leave town by cycling down some train tracks. Fairly quickly he dumped the bike and bag in a bush and walked to a nearby town, where he knocked on the door of a couple. He calmly asked if he could use their phone to call 911 because he’d committed a murder.

They gave him the phone and Kevin told the emergency dispatcher that his mother was dead in her apartment. Police rushed to the address and made the shocking discovery of Kimberly’s posed body, naked from the waist down. Kevin was arrested and brought in for questioning.

At the station, he confessed to everything and said that although he loved his mum, he didn’t have any regrets.

“I wouldn’t take back what I did,” he said. When asked what Kimberly had done to deserve dying in such a brutal way, Kevin replied, “Absolutely nothing. I’m just a terrible, disgusting person.”

Kevin admitted to using the hammer to kill his mum, and when police asked what happened next, he told them he’d had sexual intercourse with her body. “Guess I lost my virginity to a corpse,” he said, without emotion.

After killing his mum, he claimed he’d waited for his sister to come home for a while – because he’d thought about killing her too, but changed his mind. “I’d had my fill of killing. It seemed a little much,” Kevin confessed.

When police asked him how he should be punished for killing his mum, he told them he deserved 100 years in prison because he’d known exactly what he’d been doing. “I’m not mentally disturbed. I’m sane. I know what I did.”

Police were stunned when he admitted it was highly likely he’d kill again. They charged him with murder and held him on a $2million (£1.3million) bail.

At first, Kevin pleaded not guilty to first degree murder, but just before his trial, in October 2014, he changed his plea to guilty and admitted killing the mum he referred to as “the best”.

Kevin planned to kill his sister Desirae too

The court were played Kevin’s taped confession and heard him describe how he’d killed his mum and thought about murdering his sister too. Kevin’s astonishing words rang round the courtroom. “I don’t have standards,” he said. “I don’t have morals. A body’s a body. A piece of meat.”

As the sentencing jury heard how Kevin then sexually abused his mother’s body, he smiled at them.

No defence witnesses were called. His lawyer requested a light sentence and pointed out potential mental health issues, but the prosecution insisted there was no medical evidence to back it up. Kevin himself had admitted he was sane.

When the couple who Kevin had gone to after killing his mum had to point him out in court, he waved back at them. It took jurors just an hour to reach their verdict. Kevin, now 18, was given the maximum sentence – life in prison. Kevin’s grandfather Clyde Hill spoke in court to the killer. “You broke an unwritten law, you killed your mother. You just don’t do that,’ he said. ‘We won’t ever see you again.”

That fateful day, Kevin turned a desire to kill himself into a mission to commit an unthinkable murder. His devoted mum had been trying to convince him to choose life – but it seems Kevin was far too focused on death to listen.

Posted by mahustlerszone on January 12, 2015 in Bizzare, Crime

Worker is fired after going on leave for 24 years – having last shown up for work in December 1990.

A worker has been fired after going on leave for 24 years – having last shown up for work in December 1990.

Shockingly, A.K. Verma was paid the entire time – despite being found guilty of skiving 22 years ago.

He worked in the Indian civil service where jobs are considered to be for life.

Even so, he was pushing it.

Verma, an executive engineer at the Central Public Works Department, was fired after last appearing for work in December 1990.

‘He went on seeking extension of leave, which was not sanctioned, and defied directions to report to work,’ the government said in a statement on Thursday.

Even after an inquiry found him guilty of ‘wilful absence from duty’ in 1992, it took another 22 years and the intervention of a cabinet minister to remove him, the government said.

Posted by mahustlerszone on January 10, 2015 in Bizzare