The Upright Man: 10 Lessons from Thomas Sankara that President Uhuru Kenyatta should Learn 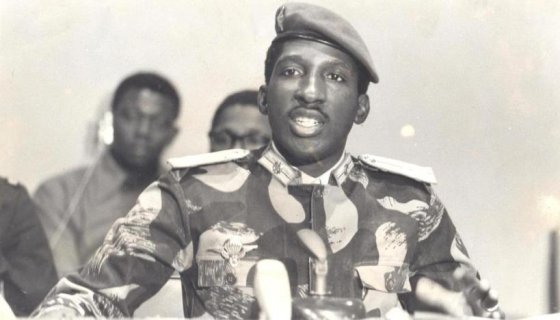 Where did all the genuine African revolutionaries go? They were either assassinated; Patrice Lumumba, Eduardo Mondlane, Samora Machel, Amilcar Cabral, Steve Biko, John Garang, Muammar Gadaffi or under siege from their own legacies. I am thinking of Nelson Mandela here. It has been decades since we saw a visionary leader that inspired the Pan African idealism of the revolutionary 60s. Look around. Africa is facing a leadership crisis. From South Africa to Egypt, Kenya to Senegal, there is a clear sense of ‘we deserve better’.

As African men, stifling under the stereotype of rogue males in power, there are not many examples around to deliver a much needed inspirational wake up call. The only standard for leadership presently is wealth and influence. Simple men with solid characters, sincere intentions and grand visions are consigned to the pages of African history.

Therefore, it is with deep nostalgia that I remember an iconic African revolutionary, a pragmatic visionary and an upright man, Thomas Isidore Sankara, the former president of Burkina Faso. We marked the 25th anniversary, since his brutal assassination on October 15 1987. As far as African leadership goes, Thomas Sankara was cut from a different piece of cloth. In his short life, the charismatic military leader set about creating an enduring legacy for conscious African citizens that is more relevant today than ever before. Progressive forces fighting economic domination and ideological slavery of Africa can draw inspiration from Sankara’s life journey.

Sankara came to power on August 4th 1983 through a popular revolution at the age of 33. In the four years that ensured, he embarked on a revolutionary paradigm shift, bringing real power down to the people, advocating for policies on African self-reliance, food security, gender parity and the dismantling of the neo-colonial development structure that continues to render African states beholden to foreign masters for survival. His solidarity and sincere commitment to the plight of all suffering people, irrespective of their location in the world is why Sankara is fondly referred to as Africa’s “Che Gueverra”. The Burkinabe revolution remains a relevant ideological model in Africa for raising mass consciousness and battling poverty.

I have attached a series of links at the end of this article for those interested in delving further into Thomas Sankara’s political legacy. That said, there is plenty that Sankara has to offer for men who are interested in improving the self. I managed to compile ten lessons from Sankara’s life that would be relevant to those seeking the simple pursuit of a balanced life of an upright man.

When Sankara came to power he changed the country’s name from Upper Volta to Burkina Faso, “The land of Upright Men”. He stressed Burkinabe culture and pride. During a famous OAU assembly address, he made a powerful statement on African self reliance by proudly showing off his traditional tunic, woven from Burkinabe cotton and sewn by Burkinabe craftsmen.

Until one’s acknowledges their roots, they can be no true understanding of who they are. Identity is a nagging issue for many African men. Who am I? Where do I belong? Many of us are disconnected from the ethnic origins and cultures of our parents and view the ethnic pride as retrogressive. We oscillate between the notion of modern liberal men touting grafted western principles and the old cherished ideals of African manhood as organized by our patriarchal structures. So class identity is often used to fill the gap of tribal disconnect and patriotism is reduced to a slogan. Only by looking deeply into our past can we evolve new insight to help define ourselves.

Sankara was one of Africa’s youngest leaders at only 33 years old when he seized power in a popular coup. In four years his contribution to African consciousness was enormous. Sankara was assassinated at the age of 38 but by then he had lived like a man on borrowed time and the impact of his life still reverberates through out the world today.

We keep on waiting for outside forces to intervene in our personal circumstances yet the solutions to a large part our problems are within ourselves. We require tenacity to face failure and fear many times because success is all about getting up one more time than you fall. For, if we do not take these calculated risks, our lives will be very small.

Too many men try to keep pace with peer expectations. Manhood is defined by the value of our possessions and frugal living is associated with poverty. Our consumer culture has sanitized greed by creating a heightened sense of lack. This thinking motivates unchecked consumption for the better part of our lives as willing prisoners of addiction or envy never knowing the peace of mind that contentment offers. Sankara was different. He did not amass wealth or create a cult of personality around him. His life was marked by frugality. At the time of his death he was earning a salary of $450 (approx kshs 38, 250) a month; he did not own much in terms of personal possessions. The most prized item was a car and 4 motorbikes. By Kenyan Mpigs standards, he was dirt broke but at the end of his life he continues to be remembered as a man of substance whose time on earth left millions enriched.

It is easy to shout in a crowd. But to hold a different opinion that goes against the sanctioned grain takes courage. To stay true to your conviction until your vision comes to fruition requires perseverance. Sankara’s achievements on the battle front and his personal charisma earned him the popular support required to become president of Burkina Faso. But he was soon to realize that not everyone wanted change. The intellectual petty bourgeoisie had interests to protect and they hit back but Sankara’s commitment to change rooted in solid personal values were unshakeable. In the end he paid for his values with his life but his ideas lived on. In the same regard, in our different engagements of livelihood, it sometimes seems like no progress is made. Work becomes mechanical, distractions are frequent and our goals look unattainable. That is the time to cultivate patience and remember perseverance as we work diligently towards our goals. The old African hunter said, “Don’t lose sight of the antelope when a squirrel darts across your path”.

Burkina Faso continues to be under threat from the advancing Sahara desert. During his tenure, Sankara introduced a reforestation initiative that saw 10 million trees planted. His legacy survived and tree planting is now a Burkinabe custom in times of celebrations to commemorate birthdays, weddings and graduations.
Our natural environment is getting systematically destroyed to make room for the aspirations of modern life. As individuals we have to be a little more conscious of how our lives are entwined with the natural world and the consequences that will be visited upon the lives of our children in the near future as a direct result of our present day mindless mass destruction of trees.

Sankara understood women’s place in Africa’s empowerment long before gender activism came into vogue. He was not reactionary, and he understood that the disempowerment of women was linked to male economic dominance by other men who lashed out to compensate for their inadequacies. He started a campaign to restore the dignity of women and return them to their rightful place in society. He studied the roots of patriarchal dominance, tracing it to the advent of private property where women were consigned to a man’s possessions. During Sankara’s reign, several women where appointed to government positions and his most powerful gesture was the day of solidarity with women. On that day, roles were reversed and men walked a day in women’s shoes, going to the market and taking care of household chores.
Too often men blame their state of emasculation on the advancement of women. Male disempowerment in Africa can be traced back to the slave trade and colonialism. The effects of centuries of degradation are real. The disempowerment plays out as violence towards women and children, delinquent habits and recklessness. But with awareness, change is possible. African men must be more proactive in creating safer communities for women and children. It starts with self examination to determine the triggers behind our insecurities and why we overreact when our position is threatened as the first step towards healing and self empowerment.

Sankara’s was a perfect example of servant leadership. The symbols of opulence all but disappeared under his watch. His down-to-earth attitude was baffling. He got rid of the presidential fleet of Mercedes and opted for the boxy fuel efficient Renault 5. He refused to use the air conditioning in his office because he did not feel he earned the privilege. These small gestures were necessary for fiscal discipline. Burkina Faso was one of Africa’s poorest nations and he understood the injustice of the one percent living off the fat of the land while the great masses wallowed in poverty. Sankara’s brand of leadership was about elevating the collective through organizing and example which he used as a reflection of his individual worth.
I read somewhere that leadership is the ability to motivate and inspire others to take positive and sustainable action. This principle is not pegged to the number of followers. It can just as easily apply to a household or a relationship. The underlying objective is not merely to lead but how well we lead that counts. At the most basic level, a true leader must live by example. All talk and no action won’t cut it.

Thomas Sankara decreed that his portrait should not be displayed all over the country in official buildings as is the norm in Africa. He saw no need to develop a cult of personality around him. Despite his high station he identified with commoners. He was secure enough in his position to be humble.

Success can be overwhelming. It takes a steady hand to ride the waves without sinking into the depths of self delusion. No matter how great the accomplishment, one must not get too attached to the noise it generates. Sooner or later, the hype will pass and it is important to remember the man you were before success came knocking.

Sankara’s style was rugged. He preferred tailored military fatigues drawing inspiration from Fidel Castro and like Che’ he wore a beret. He loved motorcycles and dressed appropriately for the bike. He promoted Burkinabe traditional as an expression of belonging. (Reference the attempt to find a Kenyan national dress)

Style essentially is about knowing who you are and how to express your individuality. It is also about comfort in your own skin. Fashion fades. Do not be a slave to trends or you will end with suitcases of clothes you detest.

Sankara’s commitment to personal fitness was total. He was regularly seen jogging unaccompanied in the streets of Ouagadougou so it’s no surprise that he was never overweight. He initiated fitness programs around the country and always seemed energized. These days as soon as man makes a little money, it is reflected on his waistline. The more prosperous one gets, the bigger the bellies grow. By the time fortune descends, he will have arrived at full term pregnancy. Physical fitness is not a priority and all about vanity with the advent of surgical short cuts. But an unhealthy lifestyle is expensive because medical cover is not getting cheaper. Most of ailments plaguing society are attributed to careless lifestyle choices and are preventable. The human body was not designed to be sedentary, so get off your butt and make exercise a regular activity.
Inspiring Thomas Sankara quotes;

Posted by mahustlerszone on September 18, 2017 in General News